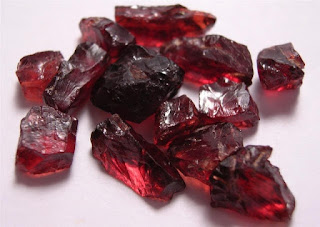 Almandine, also known incorrectly as almandite, is a species of mineral belonging to the garnet group. The name is a corruption of alabandicus, which is the name applied by Pliny the Elder to a stone found or worked at Alabanda, a town in Caria in Asia Minor. Almandine is an iron alumina garnet, of deep red colour, inclining to purple. It is frequently cut with a convex face, or in cabochon, and is then known as carbuncle. Viewed through the spectroscope in a strong light, it generally shows three characteristic absorption bands. 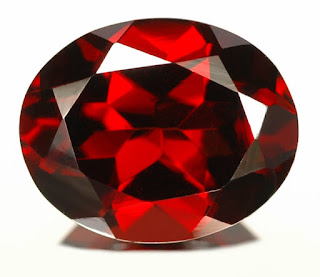 It is also a popular gemstone and the most widely used Garnet in the gem trade. More gemstones are faceted from Almandine than any other type of Garnet. Only a small amount of Almandine crystals are transparent and light enough for gemstone use; most of the Almandine found is rough and opaque and not gem quality. Some Almandine Garnets display asterism when polished as cabochons, and are known as "Star Garnets".

Almandine is often embedded in a mica schists, and forms very nice matrix pieces with perfectly formed symmetrical crystals. The schist matrix often breaks up due to weathering, resulting in the Almandine crystals breaking loose into individual, perfectly formed floater crystals which may be quite large.

Almandine occurs rather abundantly in the gem-gravels of Sri Lanka, whence it has sometimes been called Ceylon-ruby. When the color inclines to a violet tint, the stone is often called Syriam garnet, a name said to be taken from Syriam, an ancient town of Pegu (now part of Myanmar). Large deposits of fine almandine-garnets were found, some years ago, in the Northern Territory of Australia, and were at first taken for rubies and thus they were known in trade for some time afterwards as Australian rubies.
Almandine is widely distributed. Fine rhombic dodecahedra occur in the schistose rocks of the Zillertal, in Tyrol, and are sometimes cut and polished. An almandine in which the ferrous oxide is replaced partly by magnesia is found at Luisenfeld in German East Africa. In the United States there are many localities which yield almandine. Fine crystals of almandine embedded in mica-schist occur near Wrangell in Alaska. The coarse varieties of almandine are often crushed for use as an abrasive agent.

Types of Almandine Garnet include Carbuncle, Merelini Mint Garnet, Thai Garnet, Grandite, and Precious Garnet. Some rare Almandine crystals from India or Idaho have asbestos inclusions that create a highly prized, star-like effect when faceted. Precious, or Noble Garnet, is deep red and transparent. Brown and opaque Almandine is ferrous and aluminum-like with traces of manganese and/or magnesium.

In this article, the metaphysical properties of Almandine Garnet are explored. Almandine is a strong regenerative healing crystal bringing strength and stamina, and aids circulation and all blood related issues.
It is an excellent crystal for fertility, sexual potency and libido. Emotionally, Almandine cultivates a sense of security, safety and abundance. It is associated with the First Chakra and has the healing energy to help arouse the kundalini and keep those energies grounded.
It is a stone of physical love and relationships, and a spiritual stone of psychic protection. It increases willpower and resistance to all things negative. Almandine Garnet ranges in colour from light to deep scarlet, dark red, and muted shades of brown.
A host of angels are associated with its colour energies and it honours three Goddesses. Garnet is the traditional birthstone of January, and Almandine is the natural birthstones of those born in the first month of autumn and mid-autumn.
Garnet is the zodiac stone for those born under the sign Aquarius, and is an Enhancer Strengthener crystal. It has the properties of fire energy and is a talisman of protection.