Mass wasting is the down slope movement of Earth's material with respect to gravity action, landslide is a general term used for mass wasting.

The factors in consideration for the mass wasting are:

Steepness of the slope

Steepness is an obvious factor in mass wasting. A rock when breaks from its body will fall down the valley but if the slope is gentle so rock is less likely to roll down.

Types and orientation of rocks

Sedimentary rocks in slope, the upper layer or rock will slide over lower one. Consider 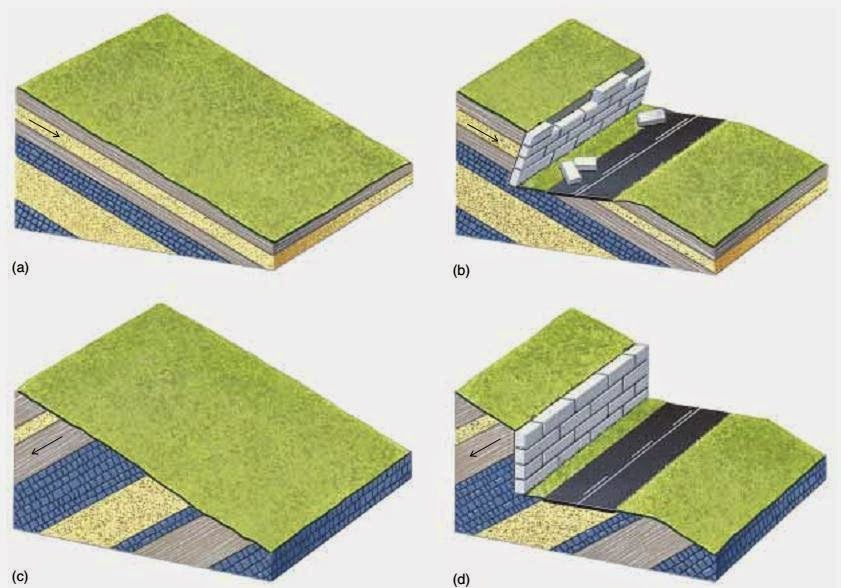 Water effects the stability of the grains. Water binds the grains of sand by the electrical charges on the water and sand grains attract each other. If the water is greater then it will saturate and because excess water lubricate the sand grains it will fall down the slope. When water is collected on impermeable layer so the above rocks can move easily.
Plants role is that its roots hold the sediments and as it absorb water, they hold the soil. A well vegetated area is more stable at same slope than barren one.

Mass wasting types depends on its speed. It is characterized in three types. Flow, slide and fall. Flow is when unconsolidated sediments comes down the slope and it flows. Slide is when rock breaks down along fracture and is slides down. Fall is the fastest type of mass wasting where rock falls freely.

There are types of flows which include creep, debris flow, mud flow, earth flow and solifluction.

Creep is the slowest movement where rock or soil moves by the action of gravity. Its movement is as slow as 1 cm/yr but wet soil can moves rapidly. The soil upper layer moves rapid than the lower portion. Trees by nature grown straight but due to creeping soil trees are tilted in J shape which are called  pistol butt. Creep is also resulted by freeze thaw cycle where water freezes and its expansion pushes the soil at right angle to the slope. When sun melts water particles move downward.

Sliding down slope as a coherent mass of a huge rock block or sometimes entire mountainside is called slide. It has two types: slump and rockslide.

Slump occurs when mass of block slide over a gentle slope hill. Trees as deep rooted are maintained on the blocks and when it slide down trees are tilted backward which distinguish it from the creep.

In a rockslide or rock avalanche the block slides down slope over a fracture plane.

Several factors are involved in the detaching of rock from blocks and when these rock freely fall under the action of gravity rapidly, this is called fall.
at September 17, 2014